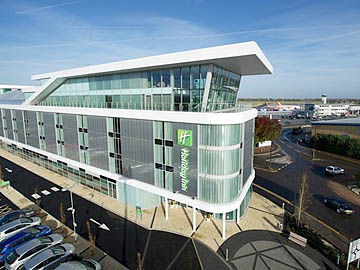 This brand new 4-star-hotelprovides a high quality experience with consistent professionalism for all your conferences, meetings and events. The 1935 Rooftop Restaurant & Bar is the only rooftop restaurant and bar in Essex. 1935 offers traditional food with a modern twist, experience panoramic views of London Southend airport and the surrounding Essex countryside.

Southend Airport (36mi/58km east of London) has seen service as a military base in both WWI and WWII. It first saw use as a Royal Flying Corps station in 1914 at the time it was the largest airfield in Britain. It helped defend Britain against the Zeppelins and itself was well protected by "pillboxes" (concrete shelters with gun positions many of which are still there and protected by Britain's Heritage Rules). It closed in 1920 and reverted back to farmland until 1935 where it reopened as an airfield. In 1939 it reverted back to military use again to defend Britain flying Spitfires, Hurricanes and Blenheims. After the war it became a civil airport flying cars to Europe (the cars used to be taken in the nose of the aeroplanes, you will see pictures of this in the rooms). In 1986 an Avro Vulcan (Cold War bomber) arrived for permanent display. The airport continued in a small way mainly for maintenance, business flights and charters due to it's short runway. Several attempts to move a church (at the end of the runway failed due to the attached graveyard but it 2008 the Stobart group successfully gained planning permission to extend the runway by moving the entire main road and leaving the church untouched. Since then an amazing transformation has taken place, a brand new terminal building (which has already been doubled in size due to the airport's popularity), a brand new control tower, a brand new train station which is one minute from the terminal with direct trains to London and - of course - our event hotel. 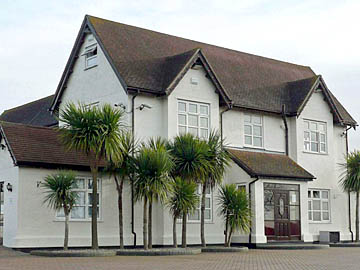 The Lodge is Essex MGF’s monthly pub meeting places, it is in Battlesbridge close to Southend. Battlesbridge is an ancient hamlet split by the tidal River Crouch joined only by an old single lane iron bridge that replaced a very old wooden one in 1872. It has a world famous antiques centre and two ancient pubs.

The Lodge itself has a maximum five star food council award, we have exclusive use of their 200 person marquee with it's own bar and toilets, the pub itself is a few steps away. We had exclusive use of two of the four car parks.